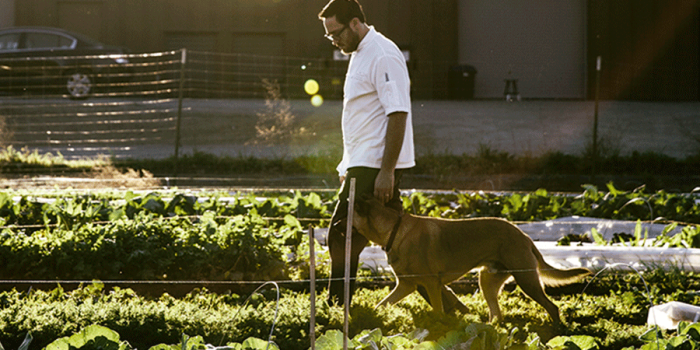 Christopher Kostow,  is a Chicago native, trained in kitchens far and wide: from a Paris bistro to the Michelin-starred Le Jardin des Sens in Montpellier. He soon became top toque at Chez TJ in Mountain View, California, garnering the restaurant many accolades including two Michelin stars.

Upon arriving at The Restaurant Meadowood in February of 2008, Christopher maintained two Michelin Stars, was nominated for Best Chef: Pacific by the James Beard Foundation and named as one of Food & Wine Magazine’s Best New Chefs 2009. In February 2010, Christopher garnered a rare four stars in the San Francisco Chronicle and was soon awarded with the highest ranking of three Michelin Stars from the esteemed 2011 Guide. Christopher is the second American-born chef and third youngest chef ever to receive three Michelin stars.

Christopher and The Restaurant at Meadowood team have since retained the three stars from Michelin in the 2012, 2013, 2014, 2015 and 2016 editions of the San Francisco Bay Area & Wine Country Restaurants Guide; as well as the four stars in San Francisco Chronicle. He has made his debut as a writer with the book A New Napa Cuisine.

Christopher Kostow had already received three Michelin Stars at the age of 34. Being so young, did it change you somewhat?

Earning three stars certainly provides some confidence and encouragement to continue on the path that you are on.  It truly made me appreciative of the contributions that everyone has made to those stars (because they are certainly not mine), including the front of house, kitchen team and our financial partners.

Were you to mention a mentor as a chef, who would you choose?

I’ve had the opportunity to work with some amazing chefs. Daniel Humm has an uncompromising sense of quality and Trey Foshee is very good at showing the context, why things have value and the value of good products.

You have a degree in Philosophy. Does that experience help you in your work?

It teaches you how to absorb information and distill it into something more personal.

How has the project evolved since you arrived at The Restaurant at Meadowood in February 2008?

It’s an entirely different restaurant – more personal and less formal. It is more creative and artistic. The food, the service, and the physical space has changed as a reflection of those things.

You aim to open a new restaurant in the short term. What will make The Charter Oak different from The Restaurant at Meadowood?

It will be a more casual experience with a lower price point and seemingly simpler style of cooking. Simple is often times harder to accomplish.

The experience will be familiar and celebratory. The Charter Oak will have the same ethos of good products and good cooking as The Restaurant.

Why Napa Valley has had a major influence on your perception of cooking?

I’m constantly inspired by the beauty of this place and the creative and dynamic people who live here.

What makes a dish memorable?

First and foremost, that it’s delicious, that it showcases the product in a way you haven’t seen before. That it’s intelligent in its simplicity.

Which are the main trends emerging in cuisine?

Hyper-locality and live-fire cooking are not necessarily emerging but something that is being discussed more often. Revisiting and re-examining the dining process as a whole is also a topic of conversation.

What’s the way you combine nuts and dried fruits in your culinary creations?

California is home to America’s premiere nut and fruit growing regions, including Napa Valley which, for example, has a long history as a producer of walnuts and prunes. We certainly try to incorporate those products in our cooking today. We use unripe walnuts for nocino, Armenian style black walnuts, and dried fruits in many preparations; it’s something that we are very mindful of.

In your opinion, what are the best qualities nuts and dried fruit can add to your cuisine?