“Dried fruits are wonderful when used in the right way, but they come to life with the addition of nuts” 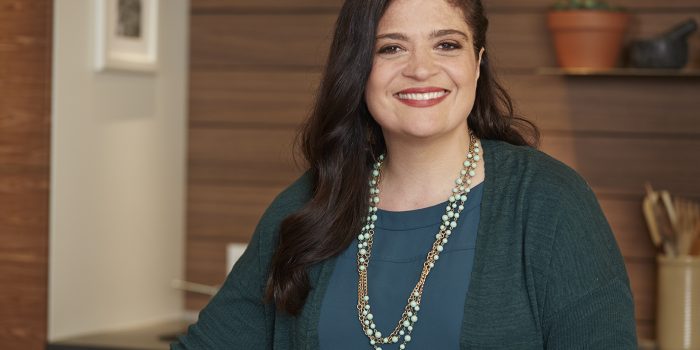 Alex Guarnaschelli, Food Network Celebrity Chef As the daughter of a cookbook editor and an Italian and Chinese cooking enthusiast, Alex Guarnaschelli was surrounded by food since her early steps….

As the daughter of a cookbook editor and an Italian and Chinese cooking enthusiast, Alex Guarnaschelli was surrounded by food since her early steps. She had the best mentors to become a celebrity chef. Her parents, and the books her mother used to bring to home, served Alex as a source of valuable knowledge and esteem for cooking. After graduation, she decided to explore new culinary ingredients and moved to France to work and study. France was a rich and challenging experience to brush her skills, but it was Alex’s return to New York what gave her the opportunity to spring her wings. In 2003, Alex became the executive chef at New York City restaurant, Butter. Then, TV appeared in her life. She is a featured judge on Food Network’s Chopped and a celebrated Iron Chef who loves to get creative in the kitchen with the flavors of Fisher® nuts. She was one of the mentors in All-Star Academy and previously hosted Alex’s Day Off, which is airing on Cooking Channel. She is also working on a follow up book to her first, Old School Comfort Food: The Way I Learned to Cook, slated for publication in 2016.In the event of not being a chef, which would have been your vocation?

I would have become a marine biologist without a doubt. Marine life fascinates me. I always joke that I started out wanting to catch and “tag” the elusive giant squid and ended up deep frying it in a kitchen instead.Do you usually cook when you are at home?

I cook for my daughter a lot–she inspires me to do some tasty, simple home cooking. For years before I had her, I didn’t so much as boil water in my apartment! Times change…What is never missing in your fridge? Capers, mustard, lemons, eggs and walnuts. Imagine it’s 10 PM and you are arriving late at home. What would you prepare for dinner?

I’d likely make some “kitchen sink” salad from what I’ve got in the fridge. Maybe hard boil a few eggs, toss with some greens, golden raisins, walnuts with a quick lemon, caper and olive oil dressing.What or who is your source of inspiration as a chef?

I love ingredients… I love to wander through a greenmarket and the supermarket too! I love casual dining. It inspires new thoughts.What do you think of this “boom” to bring haute cuisine to TV?

I think food TV is actually taking haute cuisine techniques and applying it to super casual meals. It’s not so much about caviar and lobster but about how to gain tips, techniques and skills to improve home cooking to the level of a professional chef.Does being creative depend just on the ingredients, or is there any secret for success?

Creativity is so elusive. Sometimes just getting enough sleep and drinking a good cup of coffee can inspire the best ideas. Great ingredients, from great apples or tomatoes to great beef or nuts to great paprika makes the cooking easier. Flavors are sharper from the get-go!

According to your experience, what has been more difficult for you? To convince the judges (as a contestant) or to judge the work of other competitors?

Judging is more complex. Food is so subjective and people’s choices are personal. Who am I to say that I don’t “like” their idea? Technique and execution are places where some people excel more than others. It changes all the time. Most days, I’d much rather cook and be judged than the other way around!How do you combine nuts and dried fruits in your cuisine?

I love nuts and dried fruit together in cooking. If I am making a trail mix for example, I love roasting walnuts and almonds together with salt and some paprika and tossing them with either dried apricots or prunes. If I am baking a coffee cake or other dessert, I like to stir some dried currants into the batter along with walnuts, for example, and then make a walnut streusel to top the cake as well.Dried fruits are wonderful when used in the right way but they come to life with the addition of nuts. I also love to make variations on salsa for roasted pork or even a white, flaky fish. What do nuts and dried fruits add to your dishes?

Dried fruits are sweet but they are often more layered and complex than fresh fruit.  Nuts are so versatile depending on what you’re making and what type of nut you are working with. I really love that almonds add a roasted flavor to both savory and sweet dishes. Walnuts add such tremendous richness. Walnuts can be ground and used as flour and can be used to thicken a sauce or vinaigrette.Which is the nut that it is always in your kitchen?

I am really partial to walnuts. A few walnuts are a snack that actually fills me up! I also love walnuts with chocolate so when I make a chocolate dessert of any kind, I reach for walnuts! I also love them with pork or duck. I have even made broiled clams on the half shell with walnut breadcrumbs. Yum!

“Dried fruits are wonderful when used in the right way, but they come to life with the addition of nuts”