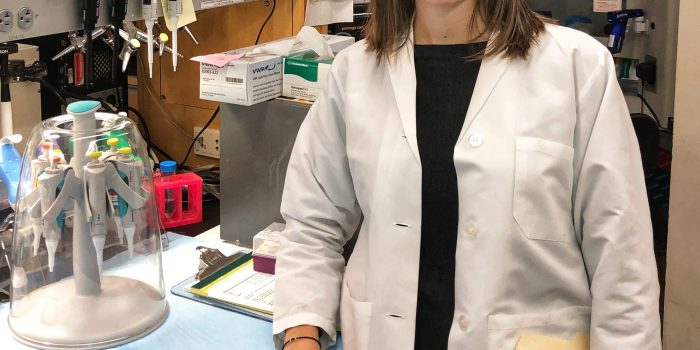 Dr. Marta Guasch-Ferré, Research Fellow at the Department of Nutrition at Harvard T.H. Chan School of Public Health (US). She holds a PhD in Nutritional Epidemiology.

You just led the “largest study to date” into the frequency of nut consumption and cardiovascular disease. Did you expect these results?

Although previous evidence has shown that frequent nut consumption is associated with reduced cardiovascular risk factors including dyslipidemia, type 2 diabetes and metabolic syndrome, as well as with lower risk of coronary heart disease (CHD), most of the previous prospective studies have focused on total nut consumption in relation to the risk of total cardiovascular diseases (CVD). However, the associations between peanut butter and specific types of nuts, such as peanuts and walnuts, with major cardiovascular events, and specifically the relation with stroke, were unclear. Of note, because the nutritional composition of peanuts and walnuts differs from other nuts, it was of particular interest to evaluate the health effects of specific types of nuts. Briefly, we have observed that in three large prospective cohorts with up to 32 years of follow-up, people who regularly eat nuts, including peanuts, walnuts and tree nuts, have a lower risk of developing CVD and CHD compared to people who never or almost never eat nuts. Our results in three large studies confirmed the previous findings in this topic but also added new lines of evidence regarding specific types of nuts and their benefits. In fact, because of the previous evidence and the unique composition of nuts, in general, we expected these results and they were in line with our a priori hypothesis.

Our study was conducted in the framework of three large-cohort studies, the Nurses’ Health Study I (NHS), the Nurses’ Health Study II (NHSII) and the Health Professionals Follow-up Study (HPFS). These studies are among the largest prospective investigations into the risk factors for major chronic diseases. NHS I included female nurses aged 30 to 55 years, from 11 U.S. states and was established in 1989. NHS II included younger female registered nurses aged 25 to 42 at the beginning of the study and was established in 1989. HPFS enrolled male health professionals between the ages of 40 and 75, starting in 1986. In all three cohorts, information about medical history, lifestyle, and health conditions has been collected by self-administered questionnaires every two years since baseline. Using food-frequency questionnaires administered every four years, we asked participants how often they had consumed a serving of nuts (serving size, 28 g [1 oz]) during the preceding year. Physicians reviewed the participants’ medical records to collect information about diseases including cardiovascular disease and death. Using all this information, we were able to analyze the relationship between nut consumption and CVD.

What is the main conclusion? Can we say that consuming nuts helps prevent heart diseases such as stroke and coronary heart disease?

The take-home message of our work is that increasing the intake of a variety of nuts, as part of a healthy diet, may help to reduce the risk of CVD in the general population. Specifically, we found a consistent inverse association between total nut consumption and total CVD (14% lower risk for those consuming nuts five or more times per week) and CHD (20% lower risk). Also, after looking at individual nut consumption, eating walnuts one or more times per week was associated with a 19 percent lower risk of CVD and 21 percent lower risk of CHD. Participants who ate peanuts or tree nuts two or more times per week had a 15 percent and 23 percent lower risk, respectively, of CHD compared to those who never consumed nuts. For stroke, the evidence was less consistent, although we found no evidence of an association between total nut consumption and risk of stroke, the intake of peanuts and walnuts was inversely associated with the risk of stroke.

Is it true that total nut consumption was more strongly associated with lower rates of fatal CVD (24%) than nonfatal CVD (9%)?

Yes, this is true, we have observed stronger associations for fatal CVD than nonfatal CVD. These results are consistent with previous studies. For example, in a study (meta-analysis) combining the estimates from 7 previous studies, a 30% lower risk of CHD mortality was observed in participants with higher nut consumption but no significant associations for nonfatal CHD were observed.

Has the association between nuts and CVD and CHD definitively proven, or is further research needed?

I believe that the evidence regarding nut consumption and CVD and CHD is quite strong and consistent. However, in our study, data on how the nuts were prepared was not available so it was impossible to test the influence of preparation methods. By this I mean that we couldn’t differentiate between salted and unsalted nuts and it is likely that it is not the same to consume raw or roasted nuts, which we know is beneficial for health, than to consume peanuts covered in chocolate or nuts with high amounts of sodium. More research is needed to further investigate the differences between the preparation methods of nuts and to further elucidate the effect of peanut butter on health outcomes.

What are the next research challenges regarding nuts and their health benefits?

Several lines of research can be pursued after this work, including a more in-depth investigation of the mechanisms underlying the associations between nuts and CVD with novel omics techniques such as genomics, metabolomics and proteomics. Also, identifying objective biomarkers of nut consumption with the use of metabolomics techniques (identification of small molecules present in a biological sample) can be of help to evaluate the compliance with dietary intervention on nut consumption. For example, to identify a cluster of biomarkers (metabolites) that can discriminate between non-consumers versus consumers of nuts as a more reliable way to assess dietary intake.

What do you consider healthy eating? Which dietary pattern is most beneficial to health?

Recently, dietary recommendations have shifted toward diets including higher quantities of plant-based foods over animal-based foods, with most dietary patterns including nuts because of their association with reduced cardiovascular risk factors and unique nutritional composition. Nuts are a good source of healthy fats including mono- and poly- unsaturated fatty acids as well as rich in plant-based protein, minerals, vitamins and fiber. Thus, they can be a key food to be included as part of healthy diets high in plant-based food and help to substitute animal foods such as red meat, providing a nutritious and delicious food. A wide range of dietary patterns can be considered healthy and beneficial to health including plant-based diets, vegetarian diets, and the Mediterranean diet, among several others.

What is true about this and what is the current scientific evidence?

Despite nuts being an energy-dense food, there is no scientific evidence supporting associations between weight gain and nut consumption. Indeed, they have been associated with lower weight gain and lower risk of obesity, probably because they can increase satiety and fullness, which may potentially reduce the consumption of unhealthy snacks.

What makes nuts so special?

Besides being a healthy food that has been proven to have several benefits for health, nuts are highly palatable and very easy to be incorporated in the context of healthy diets. They can be used as healthy snacks, or included in salad, desserts and in many recipes. In addition, and because they are high in plant-based protein and healthy fats, they are a good substitute for animal protein such as red and processed meats.

Nuts have been proven to have beneficial effects on the body, why and how do they act on our metabolism?

Nuts are believed to be beneficial for heart problems mainly because of their unique nutritional composition. Nuts are high in healthy fats (unsaturated fatty acids), fiber, minerals, vitamins and several other bioactive compounds such as antioxidants, which may in part explain their beneficial effects on cardiovascular health. Some of the mechanisms that may underlie these associations include the fact that nuts have been shown to improve blood lipids (cholesterol, triglycerides), attenuate inflammatory processes and improve glucose tolerance and diabetic related traits, all of which are risk factors for CVD. However, even greater health benefits may be achieved through a combination of several lifestyle factors, including adhering to a healthy diet (for example, diets with high amounts of plant foods and the reduction of animal foods. One good example would be to include the intake of different types of nuts as a replacement for other unhealthy foods such as red meat), moderate physical activity, no smoking, and low alcohol consumption, among other things.

What level of consumption of nuts would you recommend to the general population to reduce the risk of chronic diseases?

For total nuts, we observed that those participants who consume a handful of nuts (which is equivalent to 28g or 1 ounce) five or more times per week had the lowest risk of CVD and CHD as compared to those who never or almost never consume nuts. A beneficial effect of nuts on CVD was also observed in the group of participants consuming two to four times per week of nuts. And in fact, when we evaluated the intake of nuts as a 28g increase in nut consumption (instead of categories of nut consumption) each 28g increase in nut intake was associated with 6% lower risk of CVD and 13% lower risk of CHD. For the intake of peanuts and tree nuts the greatest benefit was also observed in the higher category, which in this case was those consuming two or more times per week and for one or more times per week for walnuts. So, I would say that the recommendations should be to consume 4 to 7 servings per week of any type of nuts in a context of a healthy diet.